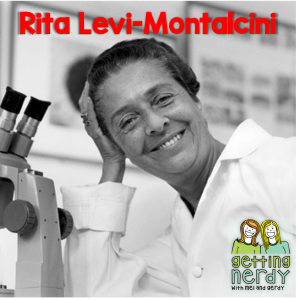 To say that neurobiologist and Nobel Laureate Rita Levi-Montalcini faced some speed bumps along the road to attaining her goals would be a wild understatement. It’s far more accurate to say that, for Rita, there was no path blazed by scientists and women before her, so she built the darn road herself! Rita hit mountain-sized boulders along the way, but always found some way to either forge a path around the obstacles or just plow ahead, right over them.

Rita Levi-Montalcini was born in Turin, Italy on April 22, 1909 to a wealthy Jewish family. Her father was an electrical engineer and her mother, an artist. At a young age, Rita considered becoming a writer. She changed course and decided to go to medical school after witnessing a close family friend’s death from cancer. Rita’s father disapproved, fearing that attending college would just postpone her destined roles as a wife and mother, but she remained determined and her father finally relented. Rita was accepted to study medicine and surgery at the University of Turin. This, in itself, was no small feat for a woman at that time.

Rita attended classes taught by a neurohistologist (someone who studies the microscopic structure of nerve cells) who sparked her interest in the developing nervous system. After graduation, Rita stayed on at the University of Turin to assist her professor with his research. It was during this time that she learned a technique for staining nerve cells that made them clearly visible under a microscope. Unfortunately, Rita’s work at the university was cut short in 1938 when Benito Mussolini banned Jewish people from working in academia and many other professions such as medicine.

No biggie though. Rita just set up a secret laboratory in her bedroom at her parents’ house! She used surgical instruments she made out of sewing needles and watchmakers’ tweezers  so as not to arouse the suspicions of Fascist soldiers. If Rita’s activities were discovered, it could have resulted in her imprisonment or even death. Talk about being dedicated to your work! Rita continued her research through World War II, even when bombing forced her family to leave Turin and head to the countryside.

Rita was Inspired by American embryologist named Viktor Hamburger to use her silver staining technique to study nerve growth in chick embryos. This had the added benefit of allowing her to eat the evidence of her research! After the war, Viktor himself contacted Rita after reading papers she’d published about her findings. He invited her to join him at Washington University in St. Louis, Missouri. From then on, Rita divided her time between the United States and Rome, eventually gaining dual citizenship in Italy and the U.S.

In 1952, Rita, along with her colleague Stanley Cohen, discovered and analyzed a chemical they called Nerve Growth Factor. Nerve Growth Factor is a protein necessary for the survival and growth of cells in the peripheral nervous system (nerves and ganglia located outside of the brain and spinal cord). It regulates cell growth and nerve cells’ communication with each other. Rita and Stanley’s findings were revolutionary in the field of embryology and added greatly to the understanding of many diseases including cancer, Parkinson’s disease, senile dementia and Alzheimer’s disease.

Rita spent the next few decades expanding her research, holding various academic positions and collecting a long list of scientific awards and prizes. In 1986, when Rita was 77 year old, she and Stanley Cohen were jointly awarded the Nobel Prize in Physiology or Medicine for their discovery of Nerve Growth Factor. Better late than never! But, Rita had no time to slow down and rest on her laurels. She founded the European Brain Research Institute in 2005, at the age of 96. In fact, Rita worked up until the day before her death. 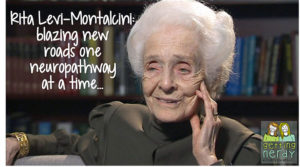 Rita died in her home in Rome on December 30, 2012 at the age of 103, making her the longest lived Nobel Laureate in history. Her work, however, lives on contributing immeasurably to our understanding of the structure and mechanics of nerve cells and leading to treatments, and hopefully someday cures, for those suffering from devastating neurological diseases. Imagine if she’d given up at that first speed bump in the road.